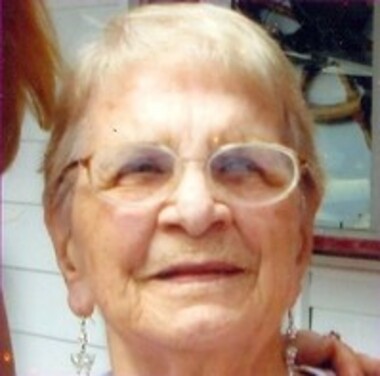 Back to Rita's story

Peabody - Rita I. (Cyr) St. Pierre, 95, beloved wife of the late Edgar J. St. Pierre, died peacefully on Saturday, December 7, 2019, at her home.
Born in Beverly, she was the daughter of the late Louis and Irene M. (Beaulier) Cyr. She was raised in Peabody and received her education in the Peabody school system.
Mrs. St. Pierre had owned and operated Hi Tone Cleaners in Salem for 42 years until the time of her retirement.
A longtime resident of Peabody, she had resided in Melbourne, Fla., for 15 years and enjoyed spending time at the family camp in Kingston, N.H. She also enjoyed gardening. Mrs. St. Pierre was a member of St. John the Baptist Church in Peabody for most of her life. She was a loving mother, grandmother, sister and friend who will be missed by all who knew her.
Surviving her are her nine children, Tina St. Pierre of Fla., Michael St. Pierre of Pa., Patricia Belanger of Peabody, Arlette Slocum of Peabody, Deborah Touchette of Salem, Edgar St. Pierre Jr. of N.H., Terry St. Pierre of Peabody, Raymond St. Pierre of Ariz., and Janine Carpenter of Burlington; 24 grandchildren; 28 great-grandchildren; seven great-great-grandchildren; and a sister, Alma Cann of Maine. She was also the mother of the late Thomas St. Pierre and Russell St. Pierre; grandmother of the late Robert Shea Jr.; and sister of the late Eugene and Gilbert Cyr.
Her funeral Mass will be celebrated at St. John the Baptist Church, 17 Chestnut St., Peabody, Friday, December 13, 2019, at 11:30 a.m. Relatives and friends are invited to attend. Burial in St. Mary's Cemetery, Salem. Arrangements by the Conway Cahill-Brodeur Funeral Home, 82 Lynn St., Peabody. In lieu of flowers, expressions of sympathy may be made in her memory to the Salvation Army North Shore, 93 North St., Salem, MA 01970. For directions and online guestbook, please visit www.ccbfuneral.com.
Published on December 11, 2019
To plant a tree in memory of Rita I. St. Pierre, please visit Tribute Store.

Plant a tree in memory
of Rita

A place to share condolences and memories.
The guestbook expires on March 09, 2020.

YOUR son RAYMOND
WILL MISS YOU MOM HAD A LOT OF GREAT TIMES TOGETHER AND A WONDERFUL LIFE GROWING UP UNDER AMAZING FAMILY VALUES WILL ALWAYS HAVE FOND MEMORIES OF YOU AND DAD LOVE YOU BOTH!!
Susan Parisien
I'm sorry to hear about your mom. Please accept my condolences. Susan Parisien.
View all