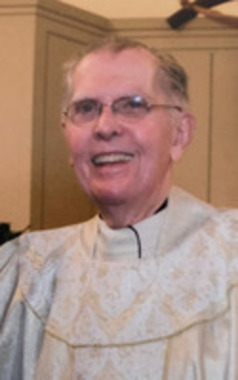 Back to Rev. Gerard's story

Born in Peabody on October 12, 1933, he was the son of the late Timothy and Marion (McBride) Dorgan. He and his family were communicants of Saint John the Baptist Church in Peabody where he attended the parish grammar school. He went on to Saint John's Preparatory School in Danvers, where he was a 1950 graduate.

Following a year of studies at the College of the Holy Cross, he enrolled in archdiocesan seminaries and was ordained on Feb. 3, 1958 by Richard Cardinal Cushing in the Cathedral of the Holy Cross.

He later earned a master's degree in English literature from Boston College and studied art history at Harvard University.

Father Dorgan was assigned briefly as a curate at Saint Margaret Mary in Westwood before being recalled to the seminary college to teach English literature and history. During his more than thirty years teaching at both Cardinal O'Connell Seminary and Saint John's Seminary, Father Dorgan also taught homiletics and developed a course of the history of art. For several years he also co-hosted an ecumenical radio program on WEEI, "Topic Religion."

Earlier in his tenure on the seminary faculty, he assisted on weekends at Saint James Church in Salem until 1976, when he began assisting at Saint Mary of the Annunciation Parish in Danvers. For fifteen years he travelled from Brighton each Sunday morning to bring his thoughtful priestly ministry to the people of Danvers.

In 1991, Fr. Dorgan became the pastor of the parish community. He served the parish and the wider community for the following twenty-one years with unwavering love and dedication. Through his eloquent and heartfelt preaching and celebration of the sacraments, he shared the message of God's loving mercy.

Recognized for his faithful ministry, in 2008 he was honored with Saint John's Prep's Distinguished Alumni Award. He was twice acknowledged by the wider Danvers community with both "Drum Major for Justice" and "Keeper of the Flame" awards during his time as pastor, and in 2012 he and the parish were recognized by Catholic Charities for their dedication to the less fortunate.

He leaves a niece, Camilla Tierney, and a number of dear friends who cared lovingly for him during his illness including Lou and Jessie Thibault, Christine and Jim Morse, and Ed McMahon. He was predeceased by a brother, Philip Dorgan, two sisters, Camilla Baribo and Mary Collins, and a nephew, Stephen Baribo.

In the final years of his life, Father Dorgan was grateful for the remarkable care he received at Youville Place in Lexington, Hathorne Hill in Danvers, and Care Dimensions in Danvers.

Father Dorgan will lie in repose in Saint Mary of the Annunciation Church, 24 Conant St., Danvers on Thursday, December 12, 2019 from 3PM to 7PM beginning with the Rite of Reception at 2:30PM. His Funeral Mass will be celebrated Friday, December 13, 2019 at 11AM. Relatives and friends are invited. Services will conclude with burial in Saint Mary Cemetery, Salem. In lieu of flowers, donations in Fr. Dorgan's memory may be made to the Father Dorgan Scholarship Fund, 24 Conant St., Danvers, MA 01923. Arrangements are under the direction of C.R. Lyons & Sons Funeral Directors, 28 Elm St., Danvers. For directions or to leave a message of condolence, please visit www.LyonsFuneral.com.
Published on December 10, 2019
To plant a tree in memory of Rev. Gerard L. Dorgan, please visit Tribute Store.

Plant a tree in memory
of Rev. Gerard

A place to share condolences and memories.
The guestbook expires on March 08, 2020.

Denise Richard
Fr. Dorgan was my parents favorite. He took the time to come to their house to bless them on their 60th Anniversary. He cam to the Nursing Home when I called and asked him to give my Mom the last rights when she was dieing, and she saw him, and thanked him. Wonderful man. I thank him for always being there.
David d'Entremont
Father, Thank you for your service to God and the people of God........
Laurelle Labrecque
I am saddened that you are not here anymore.
But I am happy that you have achieved your goal and that you are with Jesus in Paradise.
Thank you Fr. Dorgan for helping me through my many trials. I will miss you so much. I hope to see you again in Heaven with our Dear Lord Jesus Christ.
View all