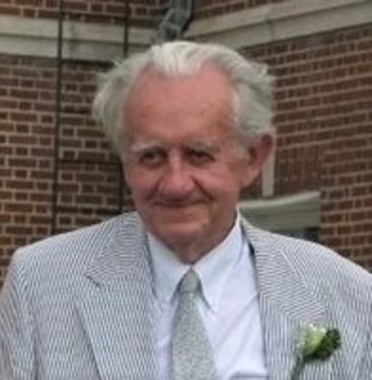 Back to John E.'s story

Manchester by the Sea - John Emmett Brennan III, 87, of Manchester-by-the-Sea, Mass., died on Saturday, January 4, 2020, at Ledgewood Rehabilitation and Skilled Nursing Center in Beverly, Mass., with his wife, Antionette Brennan, at his side.

John was born on October 1, 1932, in Lowell, Mass., to John Emmett Brennan II and Magdalene (Cooney) Brennan. He graduated from Lowell High School in 1950, after which he started his undergraduate studies at Yale University which was his father's Alma Mater. He ultimately graduated from Merrimack College with a degree in civil engineering in 1957 and embarked on a career as a structural engineer that spanned in excess of 50 years. In 1963, he joined LeMessurier Associates Inc. in Cambridge, Mass., where he eventually became a partner and worked for over 25 years. His many projects included mid- and high-rise structures located throughout the United States as well as South America and the Middle East. This included a 10-year overseas assignment as Program Manager on the King Khalid Military City located on the border of Saudi Arabia with Iraq. John later started his own structural engineering firm, Brennan and Partners Inc., in Lowell and Worcester, Mass., for a period of 10 years before returning to LeMessurier Associates to finish out his career in semi-retirement.

A true Renaissance man, John owned and operated a small vineyard and farm spread in New Braintree, Mass., where he tried his hand at agriculture and animal husbandry. He served as a selectman in Town of New Braintree and as a delegate at the Massachusetts Democratic Convention. Over the years, he taught himself several musical instruments including penny whistle, flute and concertina. After settling in Magnolia, Mass., John began a boat building project in his workshop. Even after retirement, John worked with Trustees of Reservations in the Gloucester area as a volunteer. He always enjoyed traveling, choosing to see the sites by foot and absorb the culture off the beaten path while being sure to visit every museum.

A funeral service will be held at St. John's Episcopal Church, 705 Hale Street, Beverly Farms, MA, on Monday, January 20, 2020, at 11 a.m. Relatives and friend are invited to attend. Arrangements by the Campbell Funeral Home. Information, directions, condolences, at www.campbellfuneral.com.
Published on January 15, 2020
To send flowers to the family of John E. Brennan, please visit Tribute Store.

A place to share condolences and memories.
The guestbook expires on April 13, 2020.

PHILIP & lYNNE SCANNELL
SO MANY MEMORYS OF YEARS LONG PAST.. FAMILY WEDDINGS WITH THE BRENNANS-O'DEAS-CURRY S-SCANNELL S -WALSHS-MCCARTINS EVERYONE WAS A TARGET WITH GREAT LAUGHTER.. RIP COUSIN.
View all