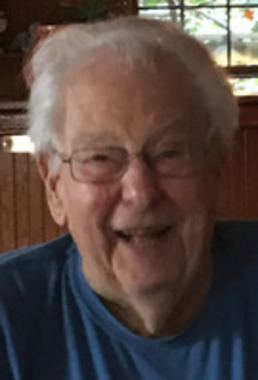 Back to Ernest's story

Ipswich - Ernest G. Jerrett Sr., husband of Mary Beth (Byam) Jerrett, died Monday, September 30, 2019, in Anna Jaques Hospital, Newburyport, following his sudden illness. He was 83 years old.
Born in Everett on September 23, 1936, he was the son of the late Ernest J. and Rosanna (Bartlett) Jerrett. Following his 1956 graduation from Wilmington High School, he enlisted in the U.S. Navy. Married in 1959, the Jerretts moved to Ipswich and he worked as a carpenter and contractor until his 2006 retirement. He was a Master Mason, a member of the John T. Heard Lodge in Ipswich, a longtime member of the Ipswich Outboard Club, where he served as secretary from 1970 to 1979 and a faithful member of the Trinity Episcopal Church in Topsfield. He enjoyed boating, traveling, and living life to the fullest through simple pleasures.
In addition to his wife of 60 years, he is survived by his son, Ernest "Bud" Jerrett Jr., of Newburyport; and twin grandchildren, Christopher and Alexandra Jerrett of West Newbury.


His memorial funeral service will be held Saturday, October 26, at 2 p.m. in the Trinity Episcopal Church in Topsfield. Family and friends are respectfully welcomed. Memorial contributions in his name may be made to Shriner's Hospital for Children, 51 Blossom St., Boston, MA 02114, and or Trinity Episcopal Church, 124 River Rd., Topsfield, MA 01983. To send a condolence to his family, please visit www.whittier-porter.com.
Published on October 9, 2019
To plant a tree in memory of Ernest G. Jerrett Sr., please visit Tribute Store.

Plant a tree in memory
of Ernest

A place to share condolences and memories.
The guestbook expires on January 06, 2020.

Restore the guestbook to view the 1 more posts by family and friends, and share a memory or message of condolence of your own.