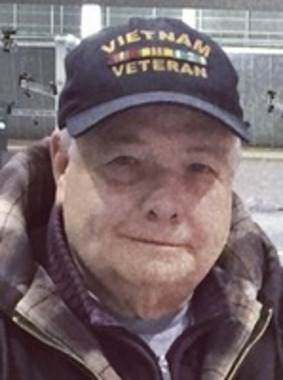 Hamilton - It is with deep sadness that we announce the death of Arthur (Buster) Maynard Hatt on January 7th, 2020 in Beverly Hospital.
Born in Bath, Maine on August 30th, 1946, and adopted by William and Esther Hatt, he grew up in Hamilton where he lived for most of his life. He was honorably discharged from service in the Vietnam War, and after returning home he was employed by Maplewood Products in Danvers. During his time there he met and later married Charlotte Anderson Hatt. He most recently helped his wife at Home Style Laundromat in Beverly, where he greeted everyone with conversation and a smile. He strived to be well-liked by everybody and succeeded by genuinely caring about others and putting other people's needs before his own. He was an avid animal lover, taking in rescues as his own family. Arthur always had a passion for cars, and spent his life collecting and learning anything he could about them.
Buster joins his son Stephen who passed in 2011. He leaves behind his wife Charlotte of 49 years, his son, Arthur Jr. of Beverly, his granddaughter, Nicole of Woburn and grandson John Michael of Brighton, brother-in-law, James (Jeff) Anderson and wife Rose Anderson of Lynn, and his beloved dog Pepper.

Visiting hours will be held on Tuesday, January 14 from 10 a.m. to 12 p.m. at the Murphy Funeral Home, located at 85 Federal Street, Salem. A funeral service will be held following the visiting hours at 12 p.m., and interment at the North Beverly Cemetery, located at 685 Cabot Street, Beverly, will be held following the service. For more information or online guestbook please call 978-744-0497 or visit www.murphyfuneralhome.com.
Published on January 10, 2020
To send flowers to the family of Arthur M Hatt, please visit Tribute Store.

Send flowers
in memory of Arthur

A place to share condolences and memories.
The guestbook expires on April 08, 2020.

Sweetest Sunrise Bouquet was purchased for the family of Arthur M Hatt by The Grandmaisons.  Send flowers

Barb Chruniak eigenbrode
Rest in Peace Buster. You were a sweet neighbor in Hamilton and by far a self taught auto me habit genius. You would say pop the hood and tightened bolts or whatever so many of my vehicles owned ran as perfect as coming off the assembly line
He also ate more peanut butter as a kidI mean he could eat a whole jar!!!
Special memories with peace above and beyond. Mahalo friend
gin osman
Hope you all are comforted now ... it's never easy to loose someone like Buster ... here's hoping everyone is safe!
Barb Chruniak Eigenbrode
So sorry Charlotte. Fond memories as kids sitting on long stairs to your kitchen. I ate saltines and Buster consumed jars of peanut butter. In 5th grade we dressed as Ukrainians with my Dad giving him hand crossstitched shirt to wear from the old country. Most amazing thing was his self taught knowledge of cars and ability to assemble one without directions. After I moved out of state I would drive back to Hamilton to visit, he would always check out cars I had by telling me to ' pop the hood!' He would then check under the hood to inspect car components. Ingeniously even if I did not see or hear issues he would tighten or perfect the engine. Never ever saw anyone like his fab ability.
You... were fab neighbors and I will miss Buster. Son Randy saddened also. RIP Arthur.
BarbRead more
Debbie Thornton
I have the image in my head of a couple of dogs stopping traffic on Cabot st ,leading their owner across the road to get over to see Buster in the laundromat parking lot whom they recognized ! He was a true dog whisperer! And a good sport when I'd accidentally call him 'Chester' - so sad for you Charlette and Pepper and Artie too
Rachel Sawyer
Some of my best memories of living in Beverly are of Buster. He made me laugh and we had such a great connection. I remember going on a couple of laundry runs with him and talking to him about our experiences with working for the ARC. I loved hearing about his train and car collection. He and I would talk about customers and how they made him laugh. He and Charlotte are my extended family. We just had so many laughs and some tears. I'm completely heartbroken. I'm so sorry for your loss Charlotte and Artie. Please let me know if you need anything.
Rita M Vallone
Charlotte , I am so sorry to hear about Buster. He was a very sweet man and will be missed. My heart and prayers are with you as you go through this sad time.
Much love Rita
Hilary Comstock
Buster, I will never forget your kind heart and sense of humor. And your stories were legendary. Rest in Peace. Love, Hilary
Alice Sanford
I will never forget our tradition of getting together New year's Eve and going out to dinner coming back to my house and playing games and celebrating New years that way. I'm so sorry Charlotte.
View all